1 2 3
The Masonic Service Association has established a Disaster Relief Fund for North Carolina, as massive flooding has hit the state in an aftermath of Hurricane Matthew.
The rampaging waters caused by the hurricane and its drenching rainfall have resulted in protective levies breaking or leaking. An Interstate highway has only recently been reopened and power outages persist in numerous areas of the state.
The Grand Lodge of North Carolina reported that three Lodge buildings were heavily damaged by the flooding conditions, and reports of damage or injury to Masonic families are expected.
Please forward to the MSA such donations, which you feel are appropriate to help our devastated Brothers, their families and others in this stricken jurisdiction. Please make checks payable to MSA Disaster Relief Fund and send them to: Masonic Service Association, 3905 National Drive, Suite 280, Burtonsville, MD 20866. When remitting funds to MSA, please mark checks, “North Carolina Appeal.”
Also, donations may be made on MSA’s webpage – www.msana.com -- with the use of a credit card. This allows funds to reach their destination faster.
MSA is a 501 (c) (3) charitable organization.
George O. Braatz, PGM, Executive Secretary
Masonic Service Association of North America
3905 National Drive, Suite 280
Burtonsville, MD 30866
301-476-7330 www.msana.com 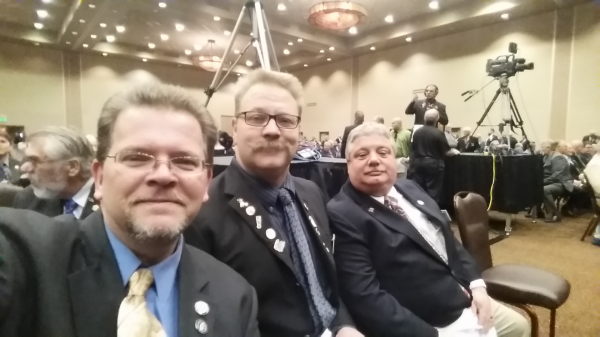 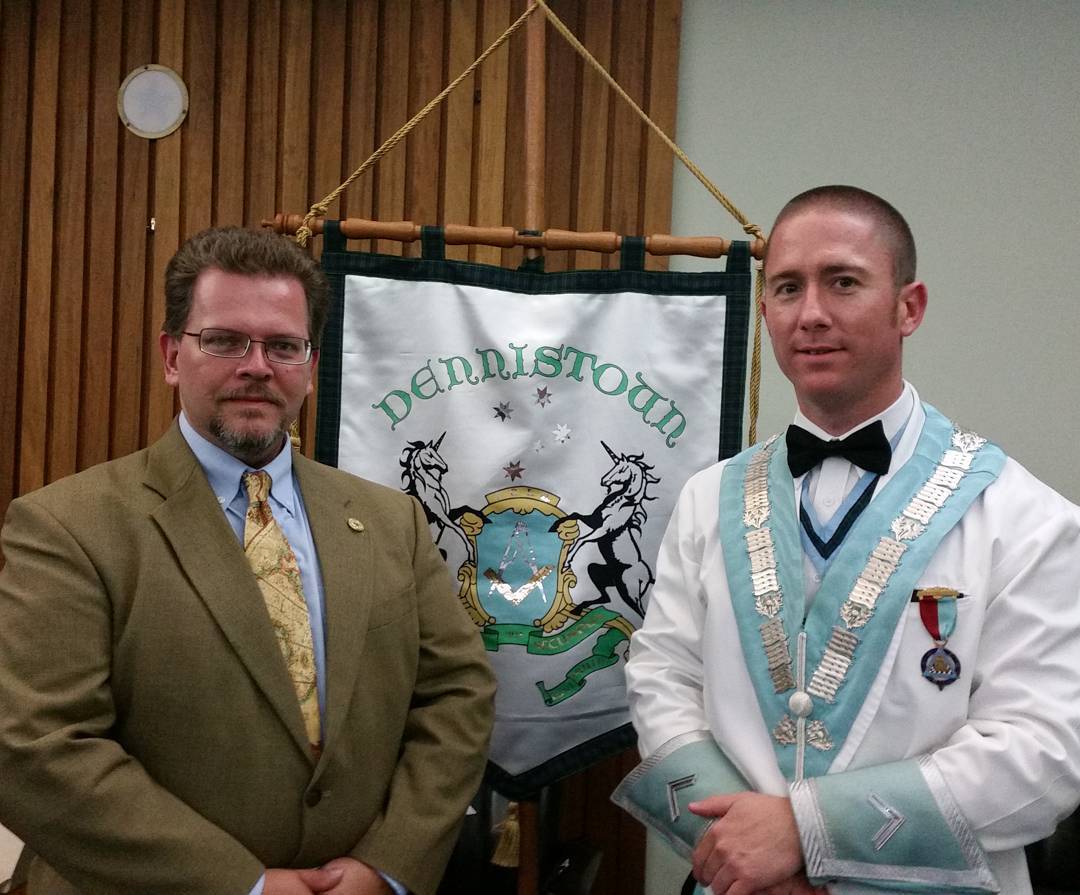 Please be advised that the annual meeting of the Fifth Masonic District Association will be held on Saturday, November 5, 2016 at 11:00 am in the Defiance Masonic Temple. All "Blue Lodge" members in good standing are "Association" members and are encouraged to attend. Association officers will be elected for the coming year. Please announce this date at your future Lodge meetings and include the date in any member updates you may send.

Marion L. Morr, age 96, of Delta, OH, passed away Sunday, August 28, 2016, at Swanton Valley Center where he was a resident. He was born in Delta on March 9, 1920, to the late Howard and Helen (Montgomery) Morr. He was a 1938 graduate of Delta High School. On June 28, 1941, he married his high school sweetheart, Gladys Murray and they shared fifty-nine years together before she preceded him in death in 2000. Marion went to work for Markey Bronze after graduating from high school and then moved to Surface Combustion in Toledo. He was drafted into the United States Army and served from 1943-1946. During that time he was a radio operator in field artillery, was involved in the invasion of Southern France, the liberation of the Dachau concentration camps and served three theaters of operation in Europe. After being discharged he went back to Surface Combustion and worked there a total of forty-two years. Marion was a member of the Delta American Legion where he was a three time commander, chaplain, financial officer and vice commander. He was also a member of the Stacatto drill team and during his involvement they were national champions. Marion was a thirty-second degree Mason and a member of the Masonic Lodge #248 and served as Master. He was an active member of the Delta United Methodist Church. Marion enjoyed playing golf, fishing and spending time with family and friends. Marion was preceded in death by his parents; wife; one grandchild, Kathryn Morr and six siblings, Robert, Gerald, Ralph, Marvin, Carl and Regina Morr. He is survived by two sons, Donald (Sharon) Morr of Delta and James (Robin) Morr of Monroe, MI; two grandchildren, Anthony (LaDeana) Morr and Craig (Jennifer) Morr; one step-grandchild, Patrick McCarthy; eight great-grandchildren, Jessica, Jaclyn, Jonathon, Gabriel, Natalie, Audrey, Elijah and Ezekiel. Friends will be received on Wednesday, August 31, 2016, from 4:00-8:00 p.m. with a Legion Service starting at 7:30 p.m., immediately followed by a Masonic Service at Barnes Funeral Chapel, 5825 State Route 109 in Delta. Services will be held Thursday, September 1, 2016, at 11:00 a.m. at Delta United Methodist Church, 101 Northwood Drive, Delta, OH 43515 with visitation an hour prior to the service. Interment will take place at Greenlawn Cemetery following the service. In lieu of flowers, memorial donations may be made to the Delta United Methodist Church, the Delta American Legion or to Compassus Hospice, 3521 Briarfield Blvd. Suite A-1, Maumee, OH 43537. Online condolences may be sent to the family through our website barnesfuneralchapel.com

Please mark your calendars for Saturday September 17, 2016, for the joint Grand Lodge of Ohio and Grand Lodge of Michigan Celebration Day.  This will take place in the Historic Detroit Masonic Temple.  The Grand Lodge of Michigan will be portraying the Entered Apprentice degree and your Ohio Grand Lodge Officers will be presenting the Fellowcraft degree.  Tours of the building and banquet will follow the degree work, and the ladies are invited.  More information to come!
Masonic Brothers,
Robert R Young, a member of Liberty Center Masonic Lodge, passed away on Thursday, August 11.  Brother Young would have received his 60 year award this year after the Grand Lodge
Communication.
The family has requested a Masonic service, which will be held at 6:30 p.m. on Sunday, August 14 at the Wright-Hanneman-Habbegger Funeral Home in Liberty Center.
If you can attend this service, it will be greatly appreciated.
Jim Parsons, Worshipful Master
Liberty Center Lodge # 518 F&AM

1. The coming year will be themed around "300 years of Modern Masonry", with special celebrations planned for June 24, which is the 300 year anniversary of The Premier Grand Lodge of England. Districts will be expected to hold some type of public event with all lodges represented.  The event should be open to all Masons and their guests.

2. Making Masons will be a top focus for Grand Lodge.  Suggestions in the form of a 5 point plan included:

- Sponsorship: correct methods in actively approaching prospective individuals.  The 16th Masonic district has been running a campaign at http://replaceyourself.org/ as a method to challenge members to bring in new candidates.
- Investigating: outlined a new background check tool (optional) for candidates.  The background check website they have patterned with has a $14 cost which Grand Lodge encourages the candidates to pay for, and their suggestion to the Lodges and Investigating Committees is either to embrace this for all candidates, or not to use it at all.
- Grand Master Class March 25: There will be a one day class this coming year.  Grand Lodge is issuing a challange to all candidates to learn the Master Mason Obligation as part of it.  This is not a requirement, but a suggestion.  New one day class masons must attend a lodge meeting after the class and before June 24.  New masons from the one day class are also not allowed to petition appendant bodies until June 25.  The class should be conducted as a district event, although multiple districts can band together to hold a single regional event.
- 300 Year Celebration: All Ohio lodges should be represented on June 24, 2017 at a coordinated event by the district, which could be an open Table Lodge.
- Help him find his place: Refocus on getting new Lodge members active in the lodge, not necessarily throwing the right in a chair, but involved in committees and community activities.

3. Charitable Priorities and consolidation of the Grand Lodge Charitable Foundation

4. New Grand Masters Pin with elements paying tribute to Ohio as the 17th state, and English style square and compasses to honor our Ancient Brethren.

A lot of good information, not many changes expected in Lodge requirements from the previous year.

There are several MM degrees in the 5th this month, they could all use FC Team help:
I paired this down to the events close to Fulton Lodge.  A full listing can be found at fabulous5th.com:
The Deputy Grand Master, Douglas N. Kaylor, will hold several meetings this summer to roll out plans for the 2016-2017 Masonic year. All Ohio Freemasons are invited to attend – particularly the Masters and Wardens, DDGMs, DEOs, District Advisors, and Grand Lodge officers. Brethren should attend the meeting that best fits their schedules. These meetings will be held in July and August so the Brethren should feel free to attend comfortably (though tastefully) dressed.