The following are some brief notes from DGM Keith Newtons Roll-out Program for 2019-2020.

Theme: Step into the Light

Grand Masters Award:
Minimal changes from last year, but a renewed focus on outreach to our lodge brothers and their widows.

Good evening brothers,
I wanted to give a brief recap of the Grand Masters One Day Class at Camp Masonry this past weekend.  We had three brothers from Fulton Lodge attending to receive their Master Mason, along with their mentors.  We also had a few brothers assisting with the Entered Apprentice Degree, put on by the Fifth District.  The Eleventh District put on the FC and MM portions, with the second part of the MM being done after dark.  If you have never had the opportunity to witness the degrees portrayed outdoors, it is something to witness.  The MM degree under starlight is really something special to watch.
A few of us also had an opportunity to sit in on some guest lectures from speakers including Robert Johnson from the "Whence Came You?" Podcast and Jason Richards from the "Masonic Round-table" Podcast.
We also had a fantastic Table Lodge with almost every Ohio Grand Lodge Officer in attendance.  A highlight was a brother from the Grand Lodge of Georgia who gave us a wonderful poetic read of the Master Mason Charge called On Yonder Book used by the Grand Lodge of Georgia.
It was a wonderful experience all around, and something to keep in mind for next year.
Best Regards,
Craig Szczublewski
Senior Warden - Fulton 248.

If you have not been to the lodge building in a while, stop in and check out Cherie's new salon space, she has done a tremendous job in making it a bright and welcoming environment and we wish her well with this business endeavor! See more on her facebook page: https://www.facebook.com/cheriesshears/?rf=1671740509730949 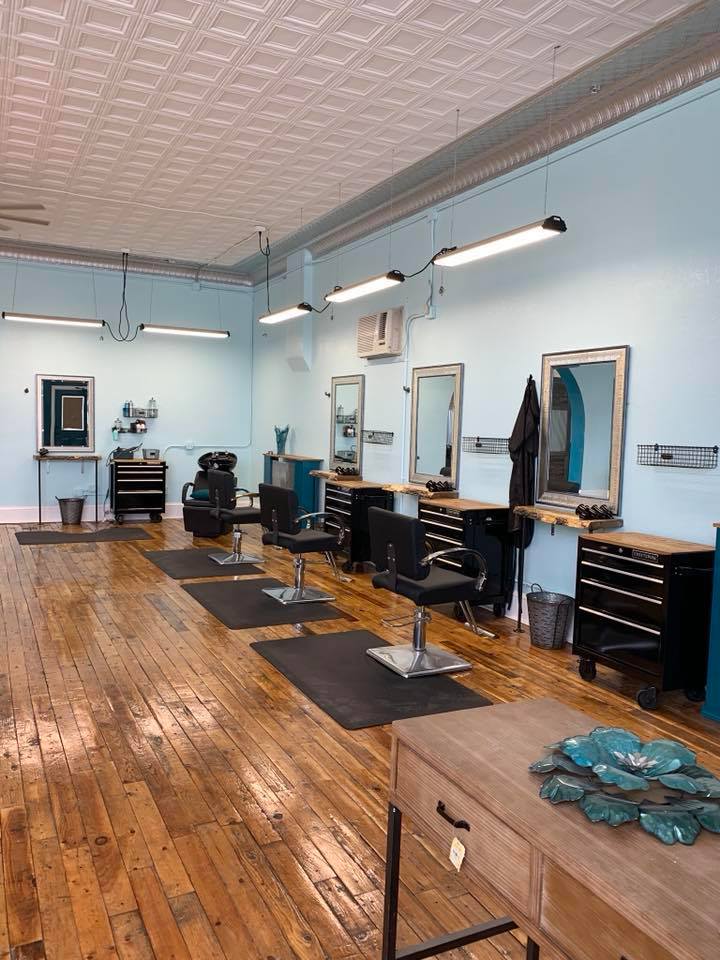 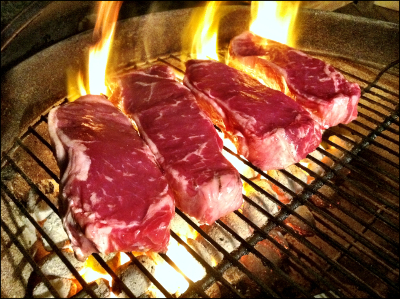 John “Jack” W. Joyner, age 73, of Delta passed away on Sunday, April 21, 2019 at St. Luke’s Hospital, Maumee. Jack was born in Indianapolis, Indiana on November 5, 1945 to John & Myra (Hugerford) Joyner. He worked for Sprint as an Electronics Tech retiring in 2005. A family man, Jack was a loving husband to his wife Dottie and was very proud of his children and grandchildren. Jack was a member of Mooresville Lodge No. 78 F. & A. M. in Mooresville, Indiana and later transfer his membership to Fulton Lodge in Delta, becoming a 50 year member. Jack loved to take things apart and learn how they worked. He was also a ham radio operator for many years. He will be greatly missed by all who knew and loved him. Left to cherish his memory is his loving wife of 51 years, Dottie; children, Jennifer (Jason) Yost; Rebecca (Rick) Helminski; John T. (Nikki) Joyner; Stephen (Crystal) Joyner and 9 grandchildren. He was preceded in death by his sister, Susan Joyner; and his parents John and Myra. Friends will be received Sunday, April 28, 2019 from 5-8 P.M. at Barnes Funeral Chapel, 5825 St. Hwy. 109, Delta where Masonic Services will be held at 7:30 P.M. Sunday evening. A celebration of life for Jack will be held at 11 A.M. on Monday, April 29, 2019 at the Delta Church of Christ, 500 Providence St., Delta. Those planning an expression of sympathy are asked to consider the Ohio Masonic Home Endowment Fund, 2655 W. National Rd., Springfield, Ohio 45504.

What to bring, besides your lady/family/guest: 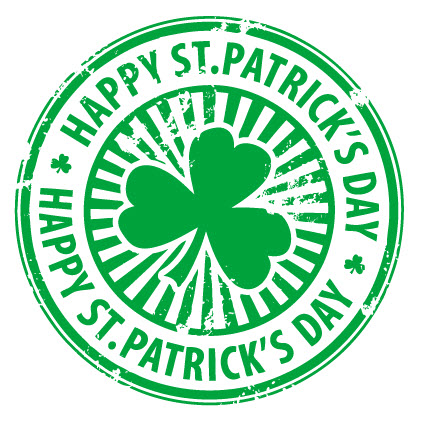 Hello brothers,
With the Grand Masters Reception approaching April 5th, there are a few deadlines for Grand Lodge award submissions I wanted to bring to your attention, and maybe get your help with some candidates.
The first award deadline coming due is the Community Service Award. Submissions are due to the DDGMs by January 25. A description of the award follows:
This year we will continue a very special award to be presented to one deserving person in each District. It is not necessary that this person be a Mason. As a matter of fact, we encourage the selection of a non-Mason for this award . It is suggested that the recipient may be any person, male or female, regardless of race, creed or color, who has displayed the virtues of Brotherly Love, Relief and Truth which exemplify the “True Spirit of Freemasonry.” The Community Service award winner shall not be someone who is an employee of, or is paid by, the organization they serve. This award is to be given to a person for volunteer service.
An example of a submission can be found here: http://fabulous5th.com/filedepot_download/208/131
If you know of anyone deserving of this award in you community, I urge you to bring those suggestions to the next Lodge meeting. That individual will be honored at our GMR on April 5.
The next award is the Grand Lodge Scholarship award. This is due February 22. Steve Brunn from Wauseon 349 is heading this up district wide and has a pretty good handle on getting the word out to most schools. The form can be found here: http://fabulous5th.com/filedepot_download/208/129
Please contact Steve for details: steveandbilliebrunn@gmail.com
The last award is the Excellence in Youth, which is due March 8. The purpose is to recognize excellence and leadership in members of the three Masonic youth groups - The Order of DeMolay, International Order of Job's Daughters and the International Order of The Rainbow for Girls. Although the award is intended to recognize outstanding service to, and leadership in our youth programs, nominees should also show active participation and leadership in school and community activities. The award is intended to encourage recipients to maintain their interest and participation in the youth groups, and ultimately in adult Masonic bodies. The recipients must be of at least high school age, but no older than 19.
Given the lack of Masonic youth groups in our district, youths active in school or other organization like Boy Scouts, 4H, etc., that demonstrate leadership would be considered. The nomination form can be found here: http://fabulous5th.com/filedepot_download/208/88
We can discuss these further at the next scheduled meeting, but I wanted to plant the idea and have you all think about some potential nominations.
Best Regards,
Craig

Our WM had occasion to meet some distant brothers while in France. He must have left a wonderful impression as this arrived for our lodge as a token of fraternal friendship. Travel often brothers, the world is so much larger then the four walls of your local lodge! 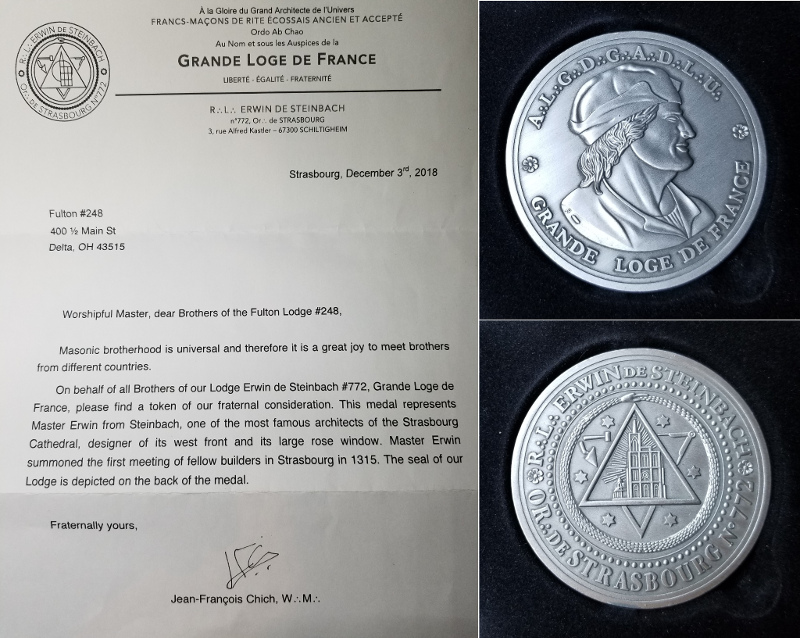 Lee Rox Dunbar passed away in his home in Bradenton, FL on October 21, 2018. Lee was born in Delta, OH to Glenn and Victoria Dunbar on May 4, 1938.
He served in the U S Army, mostly in France, as part of the Army Corps of Engineers where he received many citations for projects well completed.
After discharge from the Army he worked for 25 years at Dunbar Mechanical Contractors. During this time he served on the Apprenticeship Board and was Chairman of the Pension and Welfare Committee of Local 50 Plumbers and Pipefitters Union.
In 1981 Lee founded Commercial Pump Service in Swanton, OH. He traveled throughout the eastern United States servicing golf courses, often flying there in his own airplane. Flying was always one of his biggest passions.
Before moving to Florida, Lee was active in the Fulton Lodge #248 F & AM where he was a Past Master. He also loved boating and was a Commodore for both the Indian Hill Boat Club and Devils Lake Yacht Club.
Lee was very active in the church. As a very young man, he taught teen-age church school classes in Delta, Ohio. Later he served as an Elder of the First Presbyterian Church of Maumee, Ohio and as an Elder and Deacon at the Presbyterian Church of Brooklyn, Michigan. He sang in the choirs of these two churches as well as the First Presbyterian Church of Bradenton, FL. He loved music.
Lee was preceded in death by his parents, Glenn and “Tory” Dunbar, his brothers, Harlton and Jeffrey Dunbar, and his daughter, Patricia Pheils.
Lee is survived by his wife of 47 years, Carol; his two brothers, David (Laura) Dunbar and Stephen (Karen) Dunbar; his sister, Vicki Baney; his children, Thomas (Stacey) Dunbar, Michelle (Charles) Fuller, Cheri DeMarco (CJ Fisher); his grandchildren Jocelyn (Michael) Bostdorff, David Mueller, Charles Fuller, Jr., and Russell (Julia) Brockish; and his great-grandchildren, Drew Bostdorff, Brittany Bostdorff, Audrey Bostdorff, Luke Mueller, Weston Fuller, and Gabriella Brockish.
A gathering of family and friends will be held from 3-7 pm on Friday, November 2, 2018 at the Maison-Dardenne-Walker Funeral Home, 501 Conant Street, Maumee, Ohio with bereavement prayers to begin at 7pm. Interment will be held at 10 am on Saturday, November 3, 2018 at Toledo Memorial Park in the Chapel of Peace, 6382 Monroe Street, Sylvania, Ohio 43560. In lieu of flowers, donations may be made in his memory to the Parkinson Foundation of Northwest Ohio, 150 W. South Boundary Street, Perrysburg, Ohio 43551 or Music Fund at the First Presbyterian Church, 1402 Manatee Avenue West, Bradenton, FL 34205.